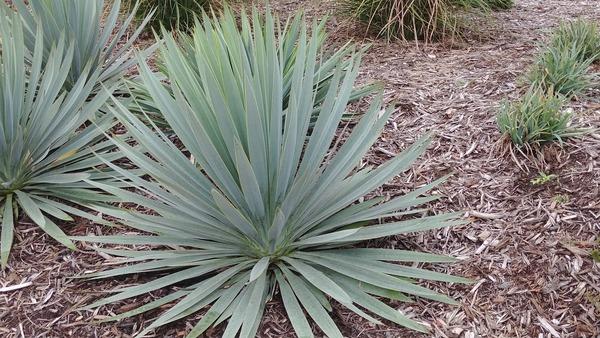 It’s easy to focus on the major needs when talking about survival. Food, water, fire, and a few other things get a lot of airtime when it comes to discussing what we need. But the reality is, there are a lot of minor things that are necessary as well. Having enough clean water to drink and food to eat won’t matter for much if you and I end up dying of a disease.

That’s why we need soap. Yes, something as simple as soap is actually important to our survival. It’s one of the biggest and best defenses we have against disease. Soap not only helps us to clean dirt and germs off of our hands, but it is a fairly good antibacterial as well.

But what do you do when there’s no soap to be found? One option is to use the root of the yucca plant.

Yucca grows throughout the Midwest and Southwest, from Texas up to Alberta, Canada, although it is found mostly in warmer climates. This amazing plant is useful for a lot of things, with the roots being edible. The root of the plant is a tuber, like a potato; with the liquid pressed out of it is also usable as soap and shampoo.

Digging Up the Yucca 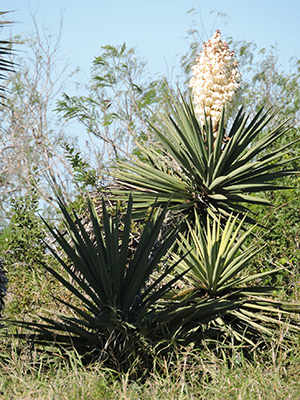 Yucca is fairly easy to dig up, as the tuber is the only real root of any size. The rest of the roots are hair size and break easily. But the tuber itself can go quite deep, especially on a large plant like the one shown above. If you’re going to dig up a yucca, I’d recommend using a smaller plant, like the one I’m digging up below.

Before going any farther, I need to mention that it is not legal to dig up yucca in all places. I was able to dig this plant up because it was on private property and the owner wanted to get rid of it.

The plant shown in this photo was found in the wild and would have been illegal for me to harvest. So before you do this, make sure you’re doing it someplace where it is legal; unless, of course, you’re in a survival situation.

As I’m doing this for survival purposes, I decided to try digging it up with a machete, rather than a shovel, under the assumption that I might not have a full-sized shovel available to me.

I wouldn’t want to try and dig up a yucca with the small folding shovel I have in my bug out bag, because the ends of the leaves are all thorns. Digging it up with that small a shovel would probably see my hands scratched up pretty badly. 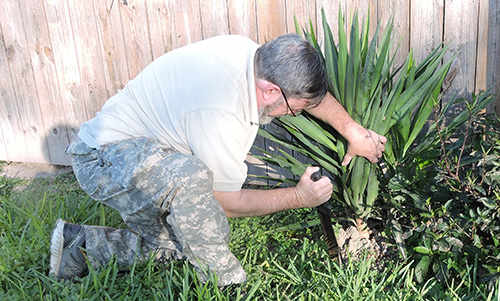 Figure 2 – Digging up the Root with Machete

As you can see in the photo, I’m holding the leaves aside, while I dig with my machete. What I did was insert my arm under the leaves, and then lift it up, pushing the stiff leaves up with my arm. I was then able to turn my hand around and grasp them, getting them out of my way.

Once the leaves are out of the way, it’s a simple matter to stab the machete into the ground, all around the root. I made a circle about eight inches in diameter, which was enough. Then, grasping the plant’s stalk, near the root, I simply wiggled it back and forth, breaking the root free and was able to lift the plant out of the ground. 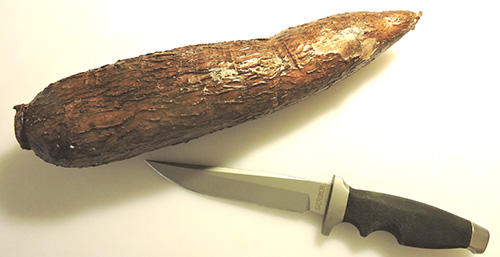 The leaves of the yucca can be used for other things, like making some pretty good sandals; but for now, all we need is the root, so I cut it off at ground level, with one swipe of my machete. Once cleaned, the root looks like this.

Cutting Up the Root 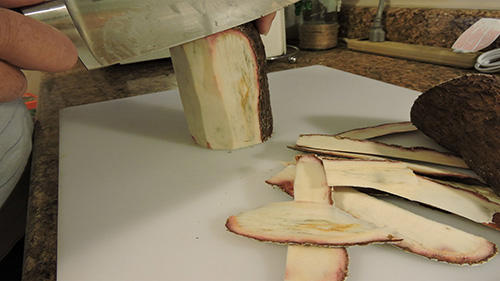 Figure 4 – Cutting off the husk

As you can see in the picture above, the root is covered by a thick skin or husk. We’re going to need to cut that off, much like cutting the outside off of the pineapple. It is hard, but not all that difficult to cut. In order to make it easier, I cut the root in half, allowing me to put the flat, cut end on my cutting board. The skin of the root cuts off fairly easy if you have a good, sharp knife. I had no problem, but I’m using a very high-quality knife with a really sharp edge. Notice the red around the edges of the pieces in the foreground. This all needs to be cut off, as well as the dark lines you can see in the piece I’m cutting. 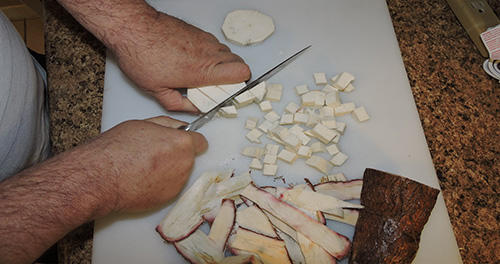 The peeled root is then sliced and diced. I did about ½” cubes. You can do smaller, but I wouldn’t recommend any larger. The ½” cubes worked well for my needs. These cubes of yucca root then need to be broken down. Even though I’m working in my kitchen at this point, I didn’t use a food processor or blender for this. We’re doing this for survival soap and I doubt that any of us keep a food processor in our bug out bags or survival kits. We need something that’s more on the order of what we’d use in such a situation. 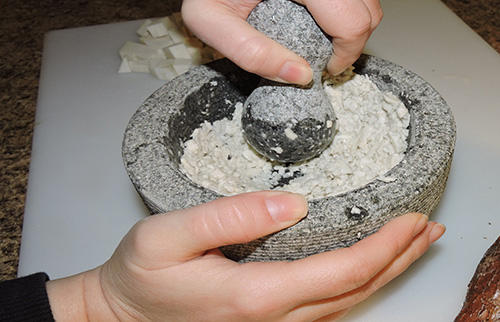 I used a Mexican molcajete, which is a traditional mortar and pestle. Rather than being made out of ceramic, they are usually made out of lava rock, which is very porous. Mine is made out of granite, which isn’t as porous, making it grind less, but is much easier to clean. Traditionally, the Mexicans use these for making salsa and guacamole. The root is hard enough that I found it necessary to beat it with the pestle, breaking it down, before grinding it. You want to get it as fine as you can, ending up with a fibrous mush. Actually, the finer you grind it, the more usable soap you’ll get out of it.

The molcajete isn’t the only way you can grind up the yucca root for use. The same thing can be done with the type of grinding stone that the Indians used for grinding corn. However, I don’t happen to have one of those and it would have been expensive to buy. In the wild, I would look for a flat stone I could use to grind on, with a rounded rock out of a river or stream as my pestle. 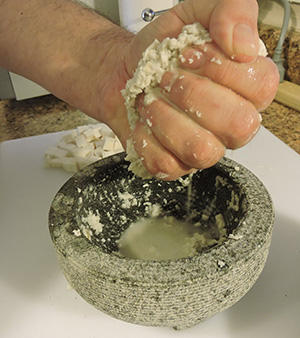 With the root thoroughly ground, you’re ready to extract the soap. All that’s needed it to take the ground root in your hands and squeeze it. The liquid that comes out is usable as soap or shampoo.

If you need to really scrub something, such as a greasy pan, you can use the ground-up root as soap. In this case, the fiber in the root will act as a scouring pad, helping you to clean the surface.

But you’ll need to use a fair amount of pressure with it, so as to press the soap out of the fiber as you go.

Even after we’ve gotten a lot of liquid out of the ground root, it is still useful for cleaning. We can dry the root in the sun and save it.

Then, when we need more soap, we can reconstitute it with water, which will draw more of the chemicals we need out of the ground-up root, giving us more soap.

It is best, when doing this, to not have pressed out all of the liquid from the ground root, as you will get better soap from it the next time around if there is still some liquid in it when it is dried.

How To Build an Earthen Oven – DIY Easy Tutorial With Pictures

How Cherokees Used Trees of Southern Appalachia for Food, Medicine, and Craft