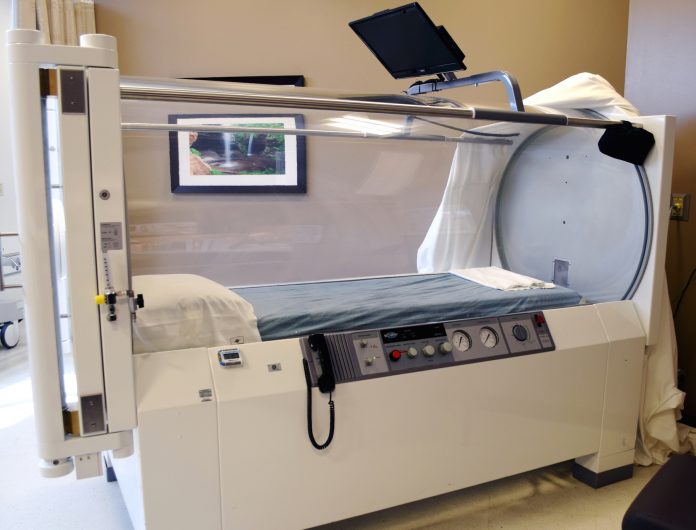 When bacteria and parasites grow resistance to our antibiotics, we’ve all learned of how ‘superbugs’ are becoming more prevalent. This escalation in resistant diseases renders our antibiotic dependence ever less viable. Maintaining understanding of the emerging alternative health care strategies is an integral part of taking responsibility for our own well-being.

Hyperbaric Oxygen Therapy (HBOT), which takes place inside a specially designed hyperbaric chamber, is one notable therapy that attracts popularity for treating many health conditions.

What is a hyperbaric chamber?

A hyperbaric chamber, basically, is a vessel of pressure in the form of a tube or a small space. This vessel holds oxygen that is three times higher than normal at an air pressure level. Our air has an oxygen content of just 21 percent at sea level. If a patient is lying or sitting in a chamber with hyperbaric oxygen, they must breathe in 100 percent pure oxygen.

For association with scuba diving and decompression sickness, or ‘the bends,’ many people may have heard of hyperbaric chambers. It has long been found that hyperbaric chambers are successful in treating individuals with this life-threatening condition, and their effectiveness in this field has been well established for decades. To give an example, since the 1940s, the U.S Navy has been using hyperbaric chambers.

There are two types of hyperbaric chambers for oxygen therapy, ‘monoplace’ and ‘multiplace.’ Monoplace chambers are built to treat one single person at a time, while multiplace chambers can accommodate multiple patients at the same time.

What is hyperbaric oxygen therapy (HBOT) and why is it beneficial?

HBOT requires oxygen medical use for healing. In the simplest terms, the human body’s tissues need oxygen to work, so when such tissues are damaged, a greater amount of oxygen is needed for recovery to occur. Breathing 100 percent pure oxygen in several different ways facilitates healing. It’s also a treatment option which is non-invasive, simple and painless.

The lungs can take in much higher levels of oxygen under the added pressure of a hyperbaric chamber. The blood then brings these elevated levels of oxygen throughout the body, even in places where the circulation due to injury is reduced or blocked. This oxygen influx activates the immune system and assists in tissue regeneration, helping the body to return to a healthy functioning state.

HBOT helps break the destructive cycle of inflammation, oxygen deprivation and death of the tissue that occurs in case of injury. Improved oxygen in the tissues also helps with infection resistance.

Inhaling high oxygen levels increases stores of white blood cells, and promotes angiogenesis, which is the creation of new blood vessels. Oxygen treatment also facilitates the development of new collagen and skin cells, which in turn contributes to successful wound healing. This dimension is prompting the quest for oxygen therapy as a skin rejuvenation treatment for appearance.

What ailments is HBOT used for treating?

We’ve already touched on the use of HBOT for compression sickness in divers, but what else is it commonly used to treat?

Anecdotal evidence suggests that HBOT is also effective in treating migraines and cluster headaches. An increasing number of practitioners are helping patients cope with degenerative illnesses such as Parkinson’s and Alzheimer’s, as improved oxygenation is believed to enhance memory and mental performance. HBOT is also being used to treat a range of neurological conditions such as strokes and brain trauma.

Proponents of HBOT believe that it has great potential for treating any condition that involves inflammation, wounding or loss of blood supply.

Related: How To Make Antiseptic Sugardine To Treat Wounds And Inflammation

Where can I receive HBOT?

A quick internet search will reveal health-care practitioners in your area who offer HBOT. It is estimated that this program is currently provided by about 2,000 hospitals in America, in addition to which there are around 700 non-hospital-based services that can deliver this treatment. Many hospital-based services can only comply with FDA-approved requirements, and so far the FDA has given its approval seal to only 14 conditions to date. It means that most insurance providers in the USA cannot cover the costs of care for these conditions.

You are most likely to seek treatment from health-care services that work outside of a hospital environment with the broadest variety of conditions. It is worth remembering that the use of HBOT actually addresses more than 63 conditions in Europe! In addition to this, hyperbaric portable chambers are currently on sale to the general public and are now entering individual homes. They will eventually become more accessible as their popularity grows.