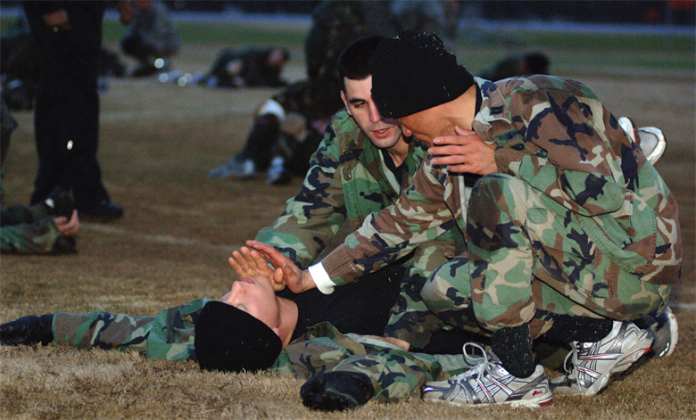 In an ideal world when an SHTF scenario takes place you’d be wearing your bulletproof vest and have immediate access to your handgun and assault rifle. Unfortunately, this may not be the case because of several factors. The laws in your country might prohibit you from carrying any weapons or the place you are attending might not allow you to carry weapons, such as universities and hospitals. So how do you defend yourself using unarmed combat skills if you get stuck in such an unpleasant situation? This article will go through the steps involved in defending yourself from the initial assessment of the threat, how to avoid or eliminate the threat with your bare hands or with any improvised weapon that you’re likely to come across in everyday life.

As with everything else, the first step is to assess the situation. The extent of your assessment will obviously depend on the prevailing circumstances. You can’t take out pen and paper and start drafting an action plan if there’s a hyped up guy slashing with a machete right in front of your face. Each situation warrants a different level of assessment. An imminent threat requires split second decisions that are mostly based on muscle memory acquired through hours of training whilst a hostage situation requires careful planning. Whatever the situation, the aim of your assessment is to identify any weaknesses of your opponent, availability of improvised weapons and escape routes. We’ll cover all these aspects in the sections below.

Basics of Self Defense

When faced with a threat you have two opposing options; fight or flight. Backing off from a confrontation might make you feel like a pussy but it’s better to feel that way for a few days rather than being killed or injured because of your pride. If you decide to run away from a confrontation/threat you have to be sure that you can run faster than your opponent, avoid any weapons he may attack you with whilst you are running (mostly applicable to firearms), and find adequate shelter before he catches up with you. If this is not possible then you’d better stand your ground and fight because once you turn your back on your opponent you’ll become much more vulnerable. THE HUMAN BODY HAS MULTIPLE WEAK SPOTS THAT YOU CAN TARGET TO YOUR ADVANTAGE.

Once you’ve decided to fight, or are forced to fight your way out, there are some basics you have to keep in mind. The fundamental principle of self-defense is to reduce to the least extent possible the damage your body receives in the attack. Key areas to protect are your entire head and face and vital organs in your torso. However, do not underestimate the importance of your limbs. You won’t be able to attack with enough force if your arm/s gets injured and you’ll have problems standing and moving about if your leg/s gets injured. How you protect yourself will depend on how you’re being attacked. We’ll go through these in the coming sections.

The next principle is to stop your assailant from what he is doing. This is achieved by hitting a delicate part of your opponent’s body with a tough part of your own body (or any hard object that comes to hand). Your attack should be vicious and aggressive. This is not the time to have sympathy. You want to cause intense pain and damage in as little time as possible in order to neutralize the assailant.

Tough Parts of the Body

Delicate Parts of the Body

When your assailant is unarmed it’s a fight on equal par and the outcome will depend on strength, stamina, technique, aggressiveness and as always a bit of luck. Although it’s important to be aggressive don’t forget about defending yourself and protecting your vitals. If you get injured, you drastically reduce your chance of winning that fight. Once into the fight do your utmost to knockout (make unconscious) your opponent or cause an injury that makes him harmless. Do not start throwing useless punches and kicks in the air like a drunkard. Instead, aim all your shots and focus on making contact with most if not all your attacks. Hit with all your strength but make sure not to lose your balance. Do not opt for fancy spinning kicks and that stuff unless you’re a professional kickboxer. Aim your kicks to his knees to knock him off-balance and aim your punches to his face and ribs if you get the opportunity. Do not unnecessarily expose yourself whilst attacking and always be ready to block his attacks. Follow these basics and you’re likely to be the one standing next to an unconscious body.

Related: Preparing Your Children for Family Separation in Emergencies

Armed with a Knife 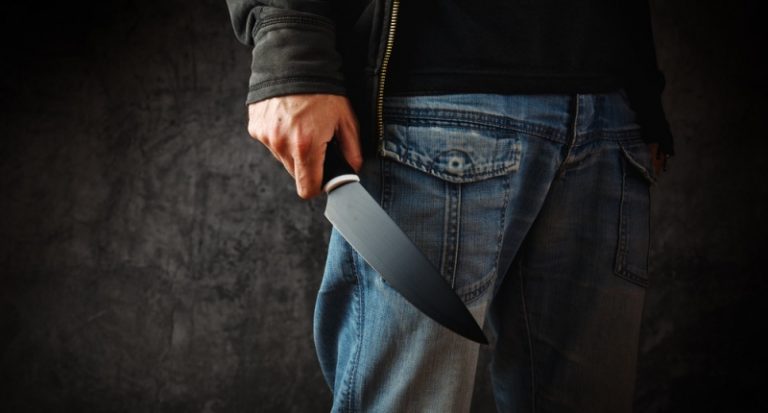 When faced with an opponent with a bladed weapon you must concentrate on that weapon and move in such a way that it never contacts your body. Keep at a distance and let your opponent slash and trust in vain. You have to wait for your opportunity to move in swiftly and grab hold of the hand holding the weapon. Do not grab the weapon from the blade. Your best chance of moving in is when he has swung the blade and is about to slash back. Once you gain hold of his weapon bearing hand hit him with all you’ve got but never let go of the hand. When you feel that he’s become weak enough, grab the weapon bearing hand with both your arms and twist it ferociously to break as many bones as possible. At this point, he should drop the weapon or loosen enough his grip such that you can safely take it away from him. Once the weapon is in your hand, it’s up to you how to proceed but keep in mind there might be repercussions, both legal and psychological if you decide to end his life.

Armed with a Firearm

An assailant with a firearm is much more difficult to disarm due to the extended range and deadliness of the weapon. Here your initial approach will be drastically different in that you want to come in physical contact with your assailant. You’ll have to do this gradually whilst distracting your assailant with conversation or a decoy. Once close enough your objective will be to grab the gun by the barrel and hold the gun pointing away from you and ideally away from other people. Movies and some martial arts experts demonstrate techniques to disarm an assailant with a gun pointing towards your head/torso. I am not judging the capabilities of these individuals but I strongly suggest you do not try this technique. All the assailant has to do is squeeze the trigger. This only takes a split second and your attempt to twist the gun might actually be what causes the trigger pull. The approach I suggest is much safer. Wait for a moment when your assailant points the gun in another direction. This is likely to happen whilst he is shouting instructions and uses the armed hand to point towards what he’s talking about. As soon as the gun is pointing in a safe direction, grab the gun by the barrel (obviously without any part of your hand obstructing the barrel’s end) and hit the assailant with all you’ve got. It’s interesting to note that if the firearm is a pistol it will shoot the loaded round when the trigger is pulled but it will not cycle another round since you will be hindering the slide’s motion. Be careful in the case of a revolver due to the hot gases escaping from around the cylinder. If it is a long firearm, grab the barrel with both hands so that you can exert more leverage. Obviously, in the latter case, you’ll have to attack with your lower limbs. 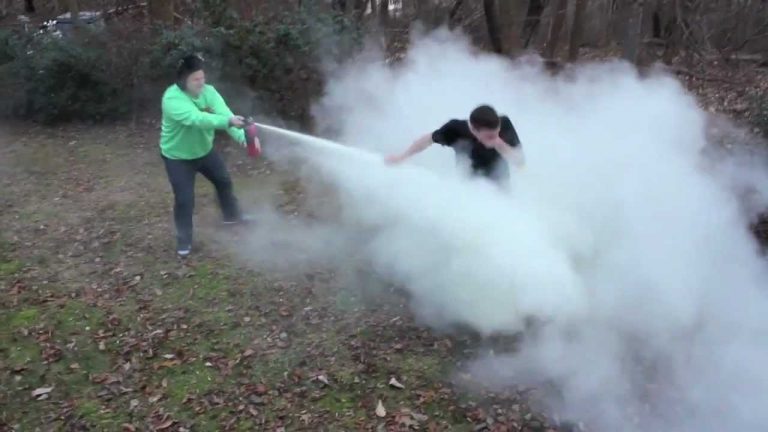 EVEN A FIRE EXTINGUISHER MAKES AN EFFECTIVE WEAPON. SPRAY THE COMPOUND TO BLIND YOUR ATTACKER AND THEN BASH THEM OVER THE HEAD WITH THE EMPTY CYLINDER.

This article is about unarmed combat in view of situations where you’re not carrying any weapons. This, however, doesn’t mean that you shouldn’t try to arm yourself with whatever might come handy. The following are a few ideas of easily obtainable weapons in everyday life.

Sticks such as a broom, billiard or long umbrella-You can swing such sticks to keep your assailant at bay but usually, such sticks are fragile and immediately break upon impact dealing very little damage to the target. Instead, use ‘weak’ sticks like you would use a lance. They will be less likely to break and will deal a lot of damage due to the low surface area which results in a lot of pressure.

Metal pen-This has a very short reach but you could easily incapacitate someone by stabbing him in the eyes or neck. You can also use a metal pen for pressure points techniques to subdue an assailant. This, however, requires training.

Stones or any other hard object such as a soda can (full)-These can be used as projectiles especially when you have an ample supply of them. If you’ve got only one it might be better to hold on to it and use it for battering your opponent.

Chair or stool-These can be used as a shield and to keep your assailant at bay as well as for striking. Obviously, they can be thrown in the typical western movie style.

Fire extinguisher-You can direct the escaping gas (CO2 will be extremely cold), water, foam or powder in your assailants face. You can also use the cylinder as a battering device or throw it at him. You could even approach the assailant from above and simply drop the fire extinguisher on him.

Stiletto Shoes-If you or anyone accompanying you is wearing stiletto shoes, take them off. You’ll be able to move with more agility (be careful if there is glass or other sharp or hot objects on the ground) and you can use it for stabbing just like you would with a metal pen.

You never know when things are going to turn sour. We do our best to always be prepared to defend ourselves but we might end up in a threatening situation whilst we’re officially unarmed. That doesn’t mean we’re all gonna die. It means that we have to prepare for that scenario like we would for any other. Always be alert of your surroundings and book yourself for a few self-defense classes and keep practicing those techniques. You’ll be glad you have if the need ever arises.