A time wracked with suicide and fear the great depression was a holly terror on the nation.

Many people exclaim that the crash of 2008 cost them everything. The truth is that the “everything” of 2008 was very different than the everything of 1930. Mothers left alone by their husbands to feed children while living in doorways. Losing children to disease or hunger and not having a dime to help them; nor a way to procure one.

All that terror aside the emulsification of cultures and despair in America during the depression created everlasting practices in the management and creation of food. The type of meals that remind you of your grandmother and her dinner table. Many of these meals are still popular today. Many of the methods are used widely as well.

The depression was a time of horror but it gave way to some incredible innovation in food and food systems. In this article; we will learn about 10 of them.

STRETCH YOUR PROTEIN WITH FILLERS 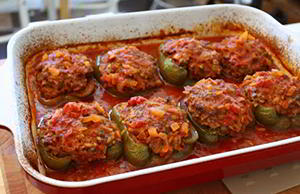 One of my favorite meals ever is my mother’s stuffed peppers. These peppers were hollowed out and sat upright like cups while bathing in sweet tomato sauce. The filling was always so delicious but I never understood why the ground beef was studded with white rice.

This was a recipe from a time when rice was used to stretch protein. Grains are often used as fillers for protein. Here is a list of other great options for stretching protein.

One of the most common sense methods to getting around starvation is to grow food anywhere you can. If people weren’t built into cities they used whatever dirt they could to grow food in. Starvation was one of the most alarming parts about the great depression. The growers and farmers’ prices dropped by 50% and the surplus of food could not be sold for profit.

This is a point that is often missed on our society. We have tons of people who hate the food system but very few who are making a strong effort to grow their own food.

We fought hard for our ability to raise chickens in the Richmond city limits. It took about a year of badgering the city council but we pulled it off. Now we have access to fresh eggs every morning.

The rules were not as strict during the depression and things like ducks; chickens; and even rabbits were raised as food. This is a great lesson from the famine of the depression that people are just beginning to understand.

Whether it was the use of salt; smoke or the removal of oxygen through canning preservation was an incredibly important factor in stretching food through the great depression. When you were lucky enough to have meat; it had to be eaten and stretched and preserved with excellence and little to no waste. For many there was no guarantee of a next time.

We must regard our meat with the same respect and appreciation. Drying food; curing it and smoking it not only work on shelf life but they also impart great flavor.

An idea that has taken many people by storm; this push towards buying locally was truly the only option during the days of the depression. There were no other options. This relationship with local farmers and shopkeepers is so important. If we see another depression similar to that of the 30’s many will be dependent on places like Amazon and Walmart to feed and clothe them. These are retailers that produce absolutely nothing.

You must get to know producers.

USE CHEAPER CUTS OF MEAT

To truly appreciate an animal; you must understand how to prepare and use every piece of it. This was not the motivation behind those suffering during the great depression. Still; it was the only the undesirable cuts of meat that could be afforded by most people. So; it became a matter of life and death for them to learn how to make these cuts edible.

I would recommend exploring the following cuts of various animals as viable and delicious food options:

Hunting was a serious endeavor in the age of the depression. For many it was hunting that put food on the table. This increase of demand on wild game affected the numbers in a big way. The hunting of these animals made them scarce for many years in some areas. The use of wildlife management has since brought many populations back.

With 300 million people in the nation hunting will only work early on. The game would all be taken very quickly. Still; it doesn’t take many animals to feed a family for a year so getting a deer or two early on would certainly be a worthwhile endeavor.

The idea of reusing and preserving material items like clothes; shoes and items around the house is so foreign in this throwaway society. Of course; any money saved on material items could be put towards heating and feeding the family. These would have taken precedence over a new dress or new shoes.

It wasn’t uncommon for a young boy to have 1 pair of shoes and one pair of pants that were cut offs of an older dead man’s pants. It was sheer necessity and we could use the idea to reuse or repair to improve our own finances and lives.

HOW YOU COOK YOUR FOOD

Though it may seem simple; the challenges of keeping warm and keeping hot food on the table made fuel a definite concern for many who were struggling in the depression. These struggles were greater in the compacted cities across the nation. Coal was used as well but it all came at a cost.

We could learn the importance of a cord of wood from our great grandparents. You should invest in a diverse array of methods for heating your home and cooking. This could include wood stoves; pellet stoves and electric generators.

TEACH THE NEXT GENERATION

Easily the most important lesson learned was the how to transfer knowledge. These lessons sometimes spanned several generations. The recipes; the traditions; the superstitions and the knowledge that kept them alive through such a terrible time still exists today. Though the marks are fading from our society you still get a whiff of them from time to time.

Just as they thought it their duty to transfer these lessons and this knowledge to the next generation so too will it be yours. You must be prepared to cut through the shroud of technology and capture the interest of the young and old who will carry this knowledge forward.