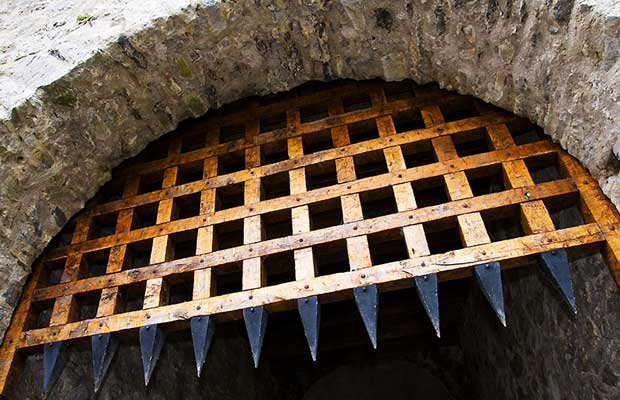 On castles of old, the front gate was often the “soft spot”–the easiest place to breach. Modern homes aren’t built with siege defense in mind (sadly), but doors are still the most common point of entry for thieves and intruders–something like 85% of forcible entries occurs through the front door.

How to secure your doors? The photo to the right, a security door from a company in Bogota, Colombia, is a pretty good “best case”. It’s armored, bulletproof, steel cored, with a vault-style locking mechanism and a steel frame. It will even stand up to power tools and mild explosives. Pretty awesome, and if you can afford it, I’d say go for it. There are several domestic companies that produce similar doors; I’d contact a reputable locksmith or security door company and go from there.

However, this high-end, vault-like door is probably a bit much for the average home–we want to look at the principles at work here and see what we can do for less.

Deadbolts are the standard and exterior doors should have a deadbolt, as a minimum. The lame little locks built into doorknobs can be defeated in about 3 seconds with a credit card. Before we get started, some basics: The average home has a deadbolt on the front door. Deadbolts are good but need reinforcing to stand up to a concentrated entry attempt. The door jamb — typically only an inch or two of wood — is all that really stands between you and a thug trying to smash in your door. That wood is usually what gives way in a common kick-in attack. One or two kicks and the back guys are in.

There are several products available to reinforce existing door jambs — look for “door reinforcers” and “door jamb armor.” Door Jamb Armor on Amazon looks pretty good. These are steel plates that reinforce the soft points on a standard door; they’re under $75 and install with basic tools in under an hour. Once installed, they will help hard harden your doors to common kick-in attacks; the door itself will probably give way first. They’ve even tested it successfully against a police battering ram – not bad for the price. A SECURITY DOOR CAN ADD AN EXTRA LAYER OF PROTECTION.

If you’re concerned about a lock picking/bumping entry, look into adding a second deadbolt – a one-sided/single-sided deadbolt. This gives you two deadbolts – one with an exterior facing key face, and the one-sided deadbolt, which has no key face and can only be opened from inside. The exterior facing deadbolt is what you engage when you’re gone. When you’re home, you can lock both. Because the second deadbolt doesn’t have a key face, that means there’s nothing for a burglar to bump or pick.

A security door is another consideration. This is a second, sturdy metal storm/hurricane-type door with its own deadbolt and reinforcement. These open outward, which makes it harder to smash in–and you’d have to smash in through the metal frame, too.  These doors have two benefits. First, if you need to open the regular door for fresh air or to talk to someone, you’ll still have a locked, secure door between you and the outside. Second, it provides a very difficult barrier that potential intruders will have to get through before they start on the main door. The door pictured, a First Alert model, is rated to 700 pounds. Unfortunately, criminals, drug dealers, and stash houses often install these kinds of doors as well, recognizing the added protection they provide from the criminal competition and even SWAT teams. Standard procedure for SWAT, I believe, is to rip the security door off with a chain attached to a truck. Anyways, a security door may, depending on your area and the design of the door, draw some unwanted attention or send the wrong signals. Keep that in mind. A final solution, and potentially the most secure, is a what I’ve heard called a crossbar. This is a medieval-style bar across the interior of the door; if you want in, you’ll need to break the bar, tear out the brackets or completely destroy the door itself. With a steel bar and sturdy, well-installed brackets, this kind of barricade can stand up to a lot of abuse. A crossbar can also be fairly easily improvised from basic materials–there’s not much to one, which makes it the go-to for improving a door’s security after TEOTWAWKI.

Here’s a modern version of the crossbar on Amazon called the Bar-Ricade. Steel tube, brackets installed into the jack/king studs of the house. Here’s a video demo. Looks pretty decent for the price and is pretty low profile.

If permanent modification of the front door is impossible, I would look into a door jammer or security bar. These wedge in at an angle between the doorknob and the floor – basically a serious version of the old angled chair trick. Of these, The Buddy Bar seems to be the best recommended, and made from all-steel, versus plastic and aluminum like cheaper models are. These slide into place fairly easily and do a good job of reinforcing the door. Not as good as a permanent option, but better than a standard deadbolt alone.

With a little bit of investment and work, there is quite a bit that can be done to harden the typical front door. Maybe not medieval castle strength, but strong enough to give you adequate time to plan your response.