What do you do, in a world where you can’t go to the supermarket and pick up a can of Campbell’s Chunky Soup? Where you can’t call up Domino’s for a pizza?

Well… you’ll live a while on your food reserves. But after that…

…you’ll become a thief, a hunter or a gardener.

The first choice is a dangerous one. Just think about what happened to the wild west horse-thieves. Plus, some people would rather die than take food from another.

Possibly the second one will operate for a month, or so. If 300 million hungry Americans head for the jungle, how long would it take for the wild animals to be exterminated? We already have eradicated a variety of animals.

When the remaining citizens start creating groups, the thievery would be the most difficult way to “earn” a living. And when the wild animals become a rarity the game of hunting comes to an end.

So… most of us will become gardeners

Agriculture didn’t just happen, it came out of gardening. Humans didn’t suddenly become farmers. They didn’t throw away their spears, stop hunting and round up cattle. Nor did they instantly stop foraging and start to grow fields of crops. In fact the transition to agriculture was gradual. Humans became gardeners, dropping the seeds of their foraged food and seeing them grow. Those early experiments by our forefathers and mothers, led eventually to a world driven by agriculture. (Source)

They also had to protect their crops against looters (tribes) just like in a post-apocalyptic scenario. Things were rough back then.

What is important to remember though, is that those early gardeners didn’t have to play with industrial fertilizers; those guys were scratch gardening, no support but from nature and their own creativity, they were early gardeners.

We are moving rapidly into a new world, one where we have to be ready to go back to the days of using our own inventions to develop our own food. To feed our families from a few sewn seeds, we need to get those skills back in.

The use of Genetically Modified Organism (GMO) related crops is a new trend that will return to haunt the guerrilla gardener.

Growing seeds in a future that could be cold, dark and free from fertilizers would be much more difficult when we see butterflies, bees and other beneficial insects that help us cross pollinate and develop our crops, decline due to cultivation practices that Monsanto (for example) uses and promotes; practices that actually harm the environment, rather than improve it.

Look out for seeds called ‘heirloom.’ They are seeds taken from plants of old cultivars. Heirloom plants come from a wider plant range and many of them were cultivated with resistance to natural diseases by hybridization between plant species (see later on how to cross pollinate plants).

Seeds need to be engineered to yield good crops, to have disease resistance and to be resistant to different conditions, such as drought or cold.

The production and selection of good quality seeds is crucial for the development of robust and successive plant generations. Now you can buy and start stocking good seeds, but these seeds may not be viable as long as you need to plant them. You are in a better position to store a few but grow more. The seeds from those plants can then be collected for future planting.

You may need to produce your own good seeds at some stage, however, using cross-pollination methods which can give you more robust and disease-resistant strains.

When this process eventually results in a viable plant, the seed from that plant is known as an F1-Hybrid and is often robust and can be highly resistant to disease (I caveat this with the fact that this requires trial and error experimentation).

Related: The States with the Most Medicinal Plants. Do You Live in One of Them?

How to Collect Seeds 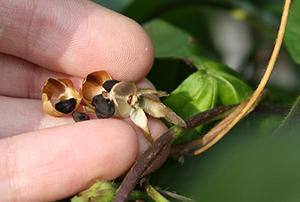 The selection of seeds depends on the plant but some general rules can apply:

Generally speaking, you can tell when the seeds are ready to harvest, for example, you can see a slight shift in color, green to brown. You can pick the plant’s heads, this is the part which contains the seeds, often called a pod, and then leave it somewhere warm and dry. If the pod has dried out, either the seeds can fall off naturally, or if the pod does not open, it can be gently crushed to release them.

Plants such as berries are a little stronger. The fruity seed-containing component needs to be crushed, even pounded, through a sieve and then the (often fine) seeds need to be washed away clean of any pulp. By putting them on something absorbent, like a paper towel, you can then leave them to dry out.

Nuts can be collected by falling from the tree and freeing them from their casing.

What is very important to note with all seeds is to avoid any extraneous material, such as packaging, as this may rot down and become infected with fungus, effectively preventing the seed from germinating (i.e. growing). 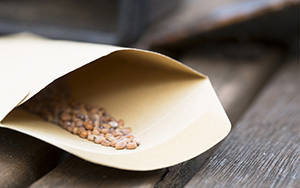 Once you have the seeds you collected, or if you have bought from a dealer of seeds, you need to keep them safe and ready for planting. Seeds if held in the right conditions can last for years. The best way of keeping them is through paper. Make small packets of paper for each type of seed and put them in it (do not forget to mark them and date them). Then keep them cold, in a dark place, the cooler the better.

Until storage, the seed must be dry; if you can keep some calcium chloride, it’s all the better, because it’s a desiccant and thus eliminates moisture. The exception to this rule is walnuts, which should not, conversely, be allowed to dry out.

You have your seeds now, you need to learn how to make them grow. It took me seven years to really comprehend how to grow seed plants. If you haven’t already been gardening, now work. If you don’t have a greenhouse, use pots – if need be, you can even grow indoors, but gardening is something that is better learned by practice, and seed germination is just as much an art as a science (tomatoes are particularly tricky).

Water is key to producing healthy crops. If you have drought issues you need to take action to handle water shortages, gather water and store it on your crops for use.

A crucial thing to note is that good soil, which has a rich organic base (ideally compost) should hold water better than poor soil, not just for areas with low rainfall.

At first, though, you do not have a lot of options in preparing your soil, but you should keep this in mind and always produce compost from your waste. 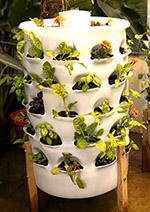 A useful technique in maintaining plants’ water absorption is putting them out in a block pattern rather than in rows – this decreases water loss and helps create shade. Or better still-vertical gardening (see picture)

Related: 53 Plants & Herbs You Can Propagate From Cuttings

Mulching is also a great way to stop water loss from the soil.

Mulch is typically some material like ripped up paper, or shavings of wood and bark spread on the surface. However, be careful what you are using to mulch as some trees, such as black walnut, these are poisonous to plants (see also notes below on using a compost toilet).

One useful way I used to frugally water vegetable plants is to use an upturned, water-filled plastic container. You need to put a few holes in the bottle’s cap and place it upturned, next to the plant, the water slowly drips out, enough to keep the plant moist, so that ensures you don’t waste water on unplanted soil.

There’s not a lot you can do if there is no light because vegetables love light. However, some vegetables can be grown in more shady and dappled areas. These include, broccoli, cauliflower, peas, spinach, kale, certain salad vegetable like lettuce and some beans.

Organic growth is something about which we can find out more now. Many people worldwide cultivate vegetables organically in a variety of habitats, with no chemical fertilizers. And our forebears did so too, of course. It is a case of having to work with what you have. Human urine, for example, which is sterile, is a well-known vegetable plant fertilizer, because it is full of nitrogen and potassium. Giving your plants personal watering will do a lot of good for them. Compost toilets are an excellent idea when it comes to urine and building one should be at the top of your list of items you need to learn how to do. Basically a compost toilet composts your own waste products which take about 6 months to complete. If the resulting mulch has been composted, it can be used for plant food and as a way of reducing soil water loss.

Seeds for the Future with Ideas from the Past 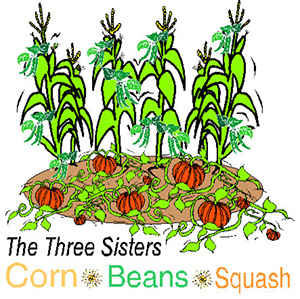 There’s a Native American gardening trick, known as the Three Sisters Garden which very cleverly uses the staple vegetable plants, squash, maize and climbing beans in ways which maximize the use of space and conditions so that each helps the other to grow more optimally. It is worth looking at this concept of co-operative planting and remembering that gardening needs thought, it will feed us, even help cloth us; it is a skill that each of us needs to learn.

Another way is to have a system totally independent of the environment in a small, leveled space, like Aquaponics.

We need to become gardeners to assure the future of our current and future family members.

“The greatest fine art of the future will be the making of a comfortable living from a small piece of land.” (quote – Abraham Lincoln)