On 11th of March 2011, the nuclear power plant at Fukushima Daiichi was struck by natural forces beyond its ability to withstand. This all began with the earthquake at Tōhoku, some 70 kilometers east of the Oshinka Peninsula. It was the most strong earthquake in Japan’s history, and the fourth record-highest, reaching 9.1 on the Richter scale.

This earthquake was so powerful that it moved Honshu’s Japanese island 2.4 meters eastward, shifted the Earth’s axis between 10 and 25 cm, slightly increased the rotational speed of the Earth, and created a tsunami with waves as high as 40.5 meters (133 feet) that struck eastern Japan. 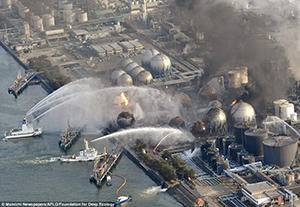 Looking dispassionately at it, it is not surprising that the earthquake has damaged the nuclear power plant. But that would have been a survivable accident, if not for the other effects of the earthquake and tsunami that resulted. Recognizing the threat, systems immediately shut down in the active reactors from the earthquake, a pre-programmed reaction to protect Japan’s population. Yet nuclear reactors produce a large amount of heat, and the tsunami destroyed the generators that ought to have supplied power to the pumps required to cool the reactors.

More than anything else it was the loss of cooling that led to the massive damage caused by the destruction of the nuclear power plant. The meltdown of the reactor itself, which included the meltdown of nuclear materials, caused those processed nuclear materials to fall into the ground underneath the containment designed to hold the reactor. Researchers today are unsure exactly how far below ground the radioactive material is, but are predicting that the Japanese people rely on it between the reactor and the underground aquifers.

This incident has been classified on the INES (International Nuclear and Radiological Event Scale) as a Level 7 nuclear event, the highest possible rating. Only one other nuclear accident, Chernobyl, has been deemed sufficiently extreme to earn the classification.

Related: A Strange Thing That Might Save Your Life in A Nuclear Aftermath

Contamination From The Accident

The Fukushima Daiichi Nuclear Power Plant is situated on Japan’s eastern coast, meaning the Pacific Ocean will be impacted by an incident of that magnitude. This spill started almost instantly, with the power plant operators releasing overheated coolant water into the ocean in an effort to avoid a more serious incident. Additionally, in an attempt to minimize the risk of explosion, toxic gas was emitted from the pressure vessels.

In the following months, some 19 pounds of caesium-137 entered the ocean. But this wasn’t the only radioactivity that reached the ocean water. Even today, rainwater flowing over the contaminated soil is washing more radiation into the sea, as well as continuing groundwater contamination beneath the site. At this time, it’s not obvious how often this interacts with the ocean water.

The ocean currents off Fukushima’s coast are among the strongest in the world and spread this contamination far into the Pacific Ocean. Quite how far this has spread is hard to determine, because there has been a steady stream of fear-mongering propagated by environmental groups. Although it is clear that the radiation has spread, and has spread far enough to hit the U.S. west coast, pollution rates are very small.

Monitoring by the Comprehensive Nuclear Test Ban Treaty Organization (CTBTO), an anti-nuclear power agency, took radioactive isotopes from more than 40 monitoring stations, including in the Southern Hemisphere. While caesium isotopic concentrations off Japan’s coat are 10 to 1,000 times higher than the average, radiation levels are still below the level deemed harmful to marine life and human consumers.

It is important to remember that, to date, there have been no deaths or illnesses due to radiation from the Fukushima Daiichi Nuclear Power Plant other than those related to the original accident, mostly caused by the tsunami, and not the accident at the power plant.

What This Means For Our Tuna 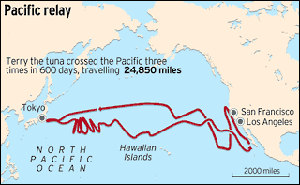 Tuna is one of the world’s most prolific fish, growing and harvested both in the Atlantic and Pacific Oceans, with more coming out of the Pacific Ocean. Most Pacific Tuna are born off Japan’s eastern coast, where they are likely to spend at least a portion of their lives swimming with at least some nuclear pollution by water. Such fish are strongly migratory, and can swim throughout their lives for thousands of miles.

Unless you believe the fearmongers, the levels of radiation are so high in the Pacific Ocean that one would expect the fish to glow. But they don’t. As with much mongering panic, the complexity of the issue is being exponentially magnified. No radiation is identified at all as large quantities, which confuses the problem for the sake of politics.

Caught off the coasts of Washington and Oregon, Albacore Tuna has been found to have some contaminants suspected of coming from the Fukushima disaster. Yet you will need to eat 700,000 pounds of the fish that they tested with the highest level of radiation, to equal the amount of radiation that the average human is exposed to from our atmosphere every year.

In other words, while any tuna you eat today is likely to swam in waters that have been contaminated by the accident at Fukushima, it does not really matter. Contamination levels are so low, no matter what some people say, that the fish you eat will not contain sufficient radiation to affect your health at all. In fact, eating a nice fresh banana will give you more radiation than eating the canned tuna sitting on your supermarket shelf.

And don’t worry about keeping tuna in stock. This will not make you start to glow and you will not start to have two-headed babies. And if you do, at least it isn’t going to be the tuna’s fault.