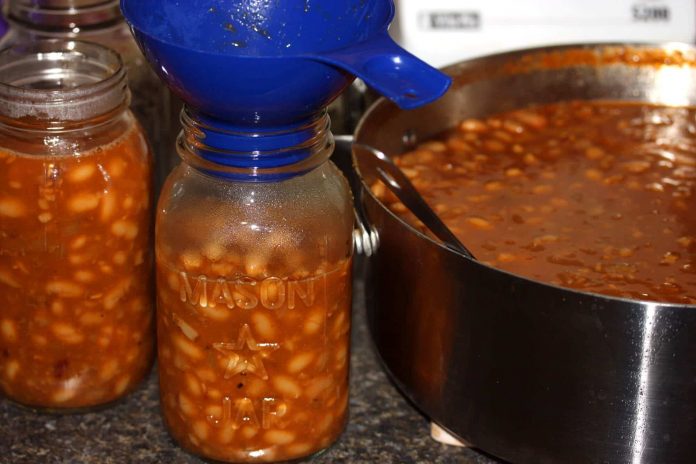 I think we can all agree than pork & beans is the alpha and omega of outdoor cooking. Why? Because it’s easy to make, it’s ludicrously cheap, and you really have to be certifiably stupid to fuck it up. Definitely a golden oldie and probably the only thing you can afford to make during a shit hits the fan situation. Yup, it’s the epitome of cowboy cuisine, and today, I’m going to teach you how to whip up the most delish, mouth-watering pork & beans dish in the world. Period!  Ready to do some cooking? Super!

Since this is what you may call survival food, you won’t need a shitload of those fancy ingredients. For this recipe you’ll need:

That’s it. Told you that this dish is a no-brainer. Can’t say about the nutritional value of the meal, but there’s no room for pussyfooting when your can is on the line. Anyway, when you’re done pilfering the pantry for ingredients, pop open a bottle of suds, quench your thirst, put on the chef’s apron, and dig in.

How to Make Homemade Pork & Beans 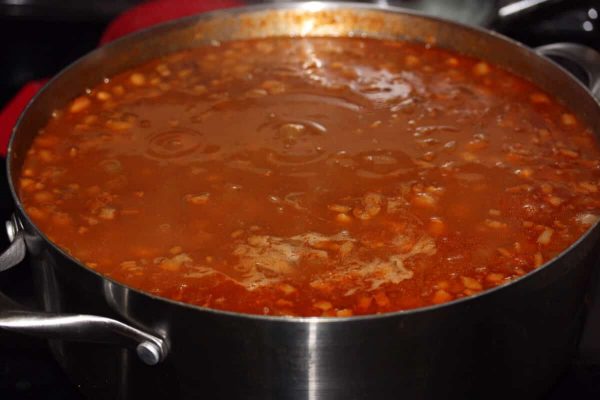 If you haven’t already opened your second or third bottle of beer, here’s how to whip up a nice and juice plate of pork & beans. Good luck, and may your hand be ever steady!

Step 1. Take the weenies out of the can and chop them into small pieces (1-2 inches should do it). Of course, you can always go with bigger chunks. In the end, it’s a matter of preference.

Step 2. Chop up the onion. Doesn’t have to look too fancy. Just dice it up and place it in another bowl. Do the same for your bacon of beef jerky.

Step 4. Take a frying pan from the pantry and put it over medium heat.

Step 5. Toss in your bacon or jerky and stir. You won’t need any oil or butter because that bacon packs a lot of fat.

Step 6. When the bacon begins to change color, add the chopped onions and weenies. Continue stirring and cook until golden brown.

Step 7. Season your bacon/onion/sausage mix with salt, pepper, and a dash of onion powder.

Step 8. Remove the pan from the stove and go grab a big pot from the pantry. ‘Twould be nice to get one with a lid, but any big pot will do.

Step 9. Over medium heat, dump the contents of the two bean cans inside. Stir the shit out of those beans.

Step 10. When the pot’s hot enough, toss in a couple of tablespoons of ketchup, the molasses, mustard, and brown sugar. Give it a good stir and let it simmer for 10 to 15 minutes. You may want to cover the pot with a lid or something.

Step 11. Remove the lid and toss in your seasoned onion/bacon/sausage mix. Stir some more, cover the pot, and let it cook. Shouldn’t take more than 30 minutes. You’ll know that the dish is ready to be served when the fork goes right through the sausages.

Related: Get An Unlimited Supply Of Beans Growing This Tree

As for the serving bit is concerned, you can eat it plain or with a side of salad. Of course, no pork & beans mean can ever be complete without a can of ice-cold beer. You can always pair it with a glass of white wine if you’re feeling fancy.

Yes, this is indeed one of those old-world recipes, but that didn’t stop chefs from adding their personal touches to it. Not that I wouldn’t mind a little imagination when it comes to cooking, but some of these so-called innovations are border on the ridiculous. Some time ago, while I was researching survival recipes (by the way, be sure to check out my article on how to bake trench cake), I found that some would use peanut butter instead of molasses to cut back on the sweetness. While it does sound like a promising and possibly healthier alternative, the taste alone is nauseating, to say the least. Not to mention of the fact that it would be kind of nasty to feed this to someone with an undiscovered peanut allergy. So, do yourself a world of good and stick with molasses on this one.

Of course, if you don’t like the extra sweetness, you can always ditch the brown sugar and use more ketchup. In the event that there’s none nearby, use fresh garden tomatoes or bouillon.

Using canned beans is inarguably the fastest way to cook this dish. Sure, if you feel like taking the highway, feel free to use dry beans.  If you plan on taking this course, there are some additional steps that should be followed. First, you will need to soak the beams. Place them in a bowl of ice-cold water and let them soak overnight. Be sure to change the water at least two times. The very next day, fill a pot with water and bring it to a boil. Allow them to simmer for 10 to 15 minutes. Use a strainer to get rid of the water. Fill the pot back up with water, add the beans, and boil them again. Discard the water again and boil the beans. Put them in a strainer, allow them to cool, and that’s it. Now you use the beans for cooking your dish.

Congrats! You now know how to cook the best and most nutritious survival food ever.  Again, I really need to emphasize the fact that it’s really easy to make and will definitely do a great job at keeping you warm on those cold nights. So, how did this little culinary experiment work out for you? Drop a line and let me know.