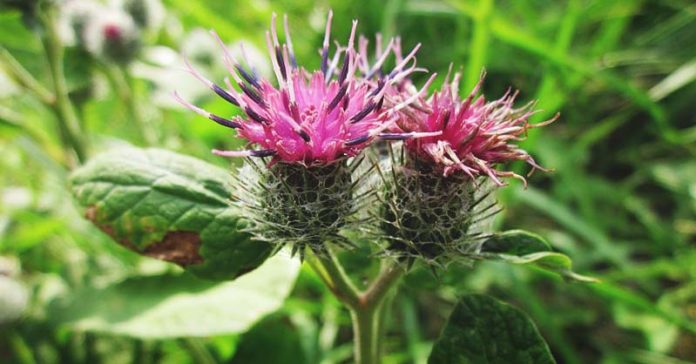 If you’ve ever walked through the edges of the woods, walking through tall leafy plants, then looked at your clothes and saw sticky burrs stuck to them, you can bet you’ve just walked through some burdock. Burdock is a tall plant, it can grow up to 4 feet, and it has purple flowers that bloom in the summer. Those sticky burrs were the inspiration for Velcro and you’ll know why if you have them on you.

The best way to deal with this annoying weed?

Burdock is indefinitely edible, that can be eaten both the plant and the root. One of my favorite soft drinks as a kid was “dandelion and burdock”. The drink was a frightful brown color, but it tasted fantastic. One of those multi-use plants, Burdock is eaten both as a meal and used as a medicine.

Burdock uses as food and medicine range hundreds of years back. Europeans, for example, used the plant as a herbal remedy which we will discuss later, using original texts. The factory was used by the Chinese and Indians for a variety of ailments including colds and flu. Local North American Indians would use the herb to treat rheumatism and it was used by Shaker families for gout, syphilis, and leprosy.

There are other uses also for the plant. The Chinese used burdock to deal with skin problems including acne and eczema. There was also a contentious event in 50s America involving a burdock. A psychiatrist named Harry Hoxsey had invented a variety of drugs for cancer. The therapies used secret formulae and also included herbs and wild flowers. Hoxsey had a lawsuit filed against him by the FDA because his cancer therapies, one of which included burdock root, had not been thoroughly labeled. Ironically, work into the use of burdock as a therapy for cancer has continued since then. There’s some interesting further reading here at the University of Maryland Medical Center.

Some Old Times Advise on the Use of Burdock

I’m a strong fan of lost wisdom. Just because wisdom comes from the past, that doesn’t mean to say it’s still not useful. A lot of our modern medicines were derived from our ancestors’ cumulative experience. Perhaps the most common was aspirin, which was used by ancient Egyptians, who used it for aches and pains, in its naturally occurring form of salicin contained in willow bark.

A quick search at ‘New Dispensatory,’ a 1765 book of herbal recipes, finds a variety of uses for arctium or bardanae majoris, the common names back in the day for burdock. This identifies the burdock (originally translated) as:

“The seeds have a bitterish, subacrid taste. They are recommended as very efficacious diuretics…”

The chapter goes on to describe the taste of burdock root, as

“The roots taste sweetish, with a sight austerity and bitterishness: they are esteemed aperient, diuretic and sudorific”

1. From the New Dispensatory 1765: Decoction of Burdock

Boil the water with the roots, so long that the liquor, when strained, may amount only to a quart; to which add the vitriolated tartar.

This decoction is drank to the quantity of one pint per day, as a mild aperient, diuretic and sweetener, for scorbutic and rheumatic complaints.”

The seeds of burdock can be ground and infused like coffee. ‘Burdock Coffee’ is good for dysentery. Here are other five home-made remedies for diarrhea.

You can also create a decoction of Burdock to be used similarly as Burdock Coffee. Decoction’s of burdock are used to treat rheumatism and gout.

To create a decoction you should follow these steps:

Notes: Sudorific means to cause sweating.

Edible Burdock: Some Burdock Recipes for Eating and Drinking

Burdock, the root in particular, is a good ingredient for all kinds of dishes. It’s the young burdock which tastes the best though. For burdock recipes, you are best using a first year plant, as after this the burdock is less palatable.

Burdock root forms the basis of this quick and easy recipe: 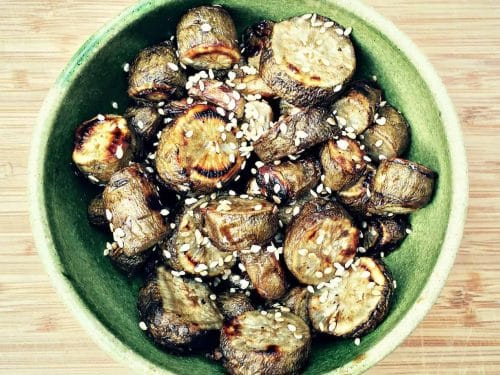 You can add a scrambled egg to the stir-fry too, once served

The Burdock is perfectly cooked in the oven as fries. Top, tail and peel the burdock root. Then slice into fries and put the oil and salt in the oven and cook at 450 F for about 15 minutes.

Top, tail and peel the burdock root. Take some potatoes and prepare them for boiling. Cut the burdock root up as finely as you can. Roast the root of the burdock, and boil the potatoes. Mash the two with butter and/or milk, and some parsley. Season with salt and pepper.

A favorite of mine. Nothing reminds me of my childhood, as this delicious soft drink. This drink is something like a root beer and a little like a sarsaparilla. This is an ancient beverage in England, dating back to the 13th century. I imagine that the D&B version was anything like my childhood drink. The recipe here is a more modern, sweet version but if you prefer, you can leave out the sweetness or substitute honey with sugar. Serve with soda or still water!