Take a look at what our pioneer ancestors ate and the chances are you’re not going to envy them very much. Compared to the food on offer in any modern American grocery store, the frontier diet was pretty basic. Choices were more limited and meals were a lot more basic.

As preppers, though, we should be giving the pioneer diet a close look. After all, these were meals that could be cooked from simple ingredients without a lot of equipment. They didn’t rely on modern preservation methods – no freezing, refrigeration or synthetic chemicals. Maybe most of all, the pioneers ate food that was ideal for a physically active lifestyle that involved a lot of hard work outdoors.

Let’s be honest here: Who was physically tougher – a modern professional who eats all the latest health food crazes, or a 19th-century farmer living on a simple, traditional diet? That isn’t a hard question to answer. Now think about your lifestyle after the SHTF. It’s going to be a lot closer to that pioneer farmer’s than to anything the modern diet evolved to suit. If you want to stay healthy and well-fed in a crisis, you could do a lot worse than turning to the recipes our frontier ancestors used. Here are a few to get you started. 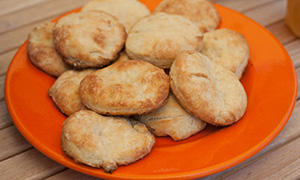 Making bread takes time and effort – and a good bit of skill. Soda biscuits are much easier. They don’t take long to make, they’re tasty and they’re versatile. You can serve them with meat and gravy, or dip them in syrup as a dessert or sweet breakfast item.

Put the flour in a mixing bowl and add milk, one tablespoon at a time, until you have a stiff dough. Mix the baking soda with a tablespoon of milk and then mix that with the dough. Add the salt and knead it thoroughly to get everything well mixed.

Roll the dough out to about half an inch thick and cut into biscuits. You can use a cookie cutter or just slice it into squares or triangles. Bake in an oven preheated to 425°F, or in a Dutch oven, for about 12-15 minutes. When the sides are brown and the biscuits are no longer doughy, they’re done. 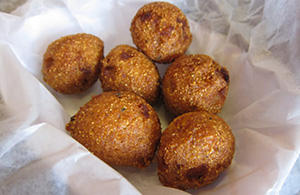 These small cornbread pieces can be eaten as a snack or served with stew, chili or even thick soups. They’re tasty, filling and simple to make.

Mix all the ingredients, except the baking powder, in a hot Dutch oven. Once the butter has melted and it’s all thoroughly mixed, remove from the heat and let it stand for about five minutes, then mix in the baking powder. With a tablespoon, drop spoonfuls of the mix into another Dutch oven or skillet and cook until the edges turn brown. 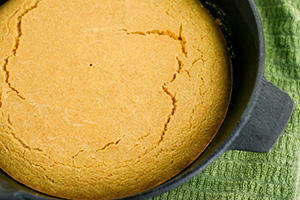 Is it a pancake? Is it a dumpling? Who cares? These are light but filling, very tasty and extremely versatile. Spread with syrup, or break into chunks and drop into a stew before you serve it.

Mix all the dry ingredients; then add the milk and molasses. If you have eggs, they’ll make the finished product even fluffier. Once the batter is thoroughly mixed, pour it into a greased 9” skillet and cook on high heat for around 20 minutes. 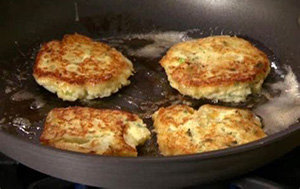 Potatoes are a robust vegetable that’s easily stored through the winter. They’re also a great source of carbohydrates and can be used to bulk out flour reserves by making tasty potato cakes. These are great with apple sauce or even maple syrup.

Wash, peel and finely grate the potatoes. Mix the other ingredients into a batter then combine that with the grated potatoes. Heat some shortening or lard in a pan, then drop in spoonfuls of the potato mixture and cook, turning once, until the cakes are golden brown on both sides. 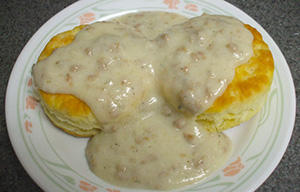 Gravy adds a lot of flavor to simple foods, especially biscuits and potatoes. How do you make gravy when all you have is preserved ingredients, though? Simple: Use jerky!

Heat grease in a skillet and fry the jerky until it’s crispy. Scoop out the jerky (it makes a tasty snack when it’s cooled). Mix the flour and milk into a batter, then pour it into the grease and slowly stir it until you have a smooth gravy. Put the jerky bits back, unless you’ve already eaten them, and season with salt and pepper.

Related: Delicious Recipes Using Cattails – “The Supermarket of the Swamp” 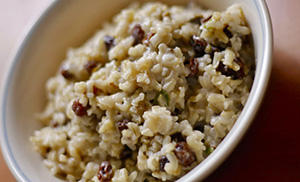 Sweet dishes are always good for both energy and morale, but it’s hard to store enough dried or preserved fruit to make them regularly. You can turn a prepper staple into a tasty pudding, though – rice.

Put the milk and rice in a Dutch oven, and add the other ingredients to taste. Heat, stirring slowly until the eggs are thoroughly cooked.

Recipe books did exist in the pioneer days, but they weren’t like modern ones. Quantities, temperatures and cooking times were often vague because even a domestic coal stove didn’t allow the near-scientific precision you can get from a modern oven. You had to vary cooking times to suit your own stove, and that goes double when you’re cooking on an open fire. It takes practice to judge when things are done when they’re cooking too quickly or slowly, or when they’re in danger of burning. Master that, though, and you’ll find these pioneer recipes are a great way to make quick, tasty and nutritious meals even when you’re reduced to basic food supplies.