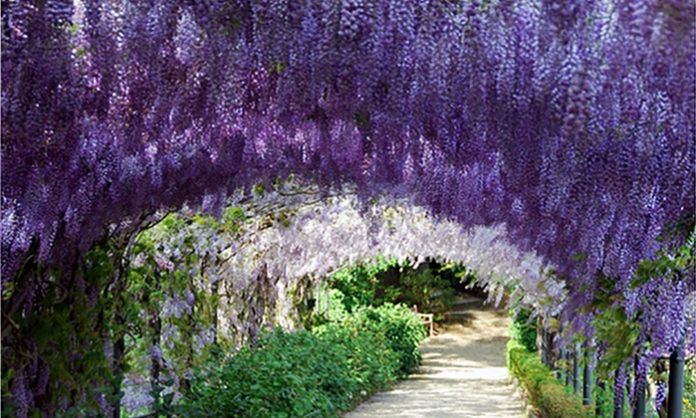 We’ve all seen coworkers with unruly offices sprouting books and papers from the walls apparently. Yet the job continues to be done no matter how large the piles rise and the inhabitants buried underneath the stacks survive.

Not so with our gardens. Our jungles in the backyard that look fantastic and appear thriving, but the unkempt beds are not all well. Aggressively developing plants are vying voraciously for space and taking nutrients from neighbors suffering from it. This becomes particularly problematic when you try to cultivate patches of vegetable gardens or berry trees and experience poor yields.

Let’s take a look at some of these garden killers with a smiling face, pretty plants that should be introduced into your yard environment at your peril…

This plant enjoys a sterling reputation, especially around highfalutin college campuses in the northeast United States and in the hearts of Chicago Cubs baseball fans defending the brick outfield walls of their beloved Wrigley Field. English ivy can be an appealing choice for homeowners seeking ground cover in shady areas.

At first, these vines will appear as a friendly addition to your landscape with their eye-catching variegated leaf patterns. Not much early growth and demanding no care at all. Yet after being a good garden citizen for two years-watch out. Such nimble climbers are going to grab hold of anything and anything they can get on their greedy little roots as they sprint over 10 meters (33 feet) in length. Hold your pruning shears sharp, and prepare your knee pads to contain the invaders.

Even the name evokes gladness. Poems and songs about the beguiling plant have been published. And it’s easy to see why with its heart-shaped leaves and large funnel-like flowers in shades of blue and purple, and yellow and red. Yet beware gardener. Once these beauties are built, take no prisoners. For some areas, this rapid-response vine is also regarded as a noxious weed.

You may assume their potential for damage can be corralled because most morning glories are listed as annuals. Yet even in colder areas, it has been known that these plants rear their pretty heads every spring and re-seed themselves during the growing season. The only defense against a suffocating blanket of morning glories is the vigilant dead-heading of spent blooms and after the first frost cutting dead vines to the core.

Related: Lost Remedies from Our Forefathers

Like their flowering vine cousin, the morning glory, the trumpet vine does not conduct guerrilla assaults on your garden by sudden season-to-season reappearances. This garden warrior doesn’t make any secret of his intent to conquer your yard. The perennial trumpet vine is valued for its abundance of reddish-orange blooms and the colibris which find them irresistible. Even the trumpet vine seed pots are really cool to look at.

Yet if Mae West was wrong and the splendors of the trumpet vine would soon wear out their welcome too much of a good thing is not wonderful. Growth can exceed 10 meters (33 feet) in one single season. This intrepid intruder may also wage war on roofing shingles and foundations if propagated close to the building. The woody vines are tough varmints just to get rid of. If you really have to – and many do – have a trumpet vine try to plant it in a five-gallon bucket with the bottom cut out and drop it into the dirt. Or locate it an open area where the spreading growth can be mowed down.

Why could something so beautiful and sweet as this be dangerous? Well, not only will wisteria plot an implacable march on your garden but this twisting vine strangles victims as it goes in its lavender-laced tentacles. The good news is that it needs no fertilization or irrigation, or care at all, for that matter.

The only way to fight back against willed wisteria is through a systematic intense pruning campaign. And not even sniping endlessly. You need a virtual master’s degree in proper pruning technique to know where to mount your shears, and at what time of year. But even that does not combat the root system’s insurgence. Yet wisteria is pretty much so lovely.

5. Lily of the Valley

With its scented little white bells for flowers, the lily of the valley seems to be an unlikely candidate to be lumped in with the garish creeping vines above. Yet its troops are massing underneath on rhizomes itching to spread out and claim land. Adaptability is the secret weapon of this spreading mass, performing equally well in light or shade, moist, or parched soil.

Under the canopy of ground cover, several garden killers are welcomed into the yard. Here, fill in a bare spot, take over a place where nothing else grows. The problem is that these plants are often not easily persuaded to remain cooped up on their intended territories until the job is done. One such plant, Gooseneck loosestrife will go above and above the Call of Duty.

The low-growing perennial comes in violet, pink, white, and yellow blooms which gently arch at the end of a spike. It is a tolerant soul which will react in any conditions of the soil, save complete dryness. And gooseneck loosestrife can become highly aggressive under ideal conditions. Even concrete is prone to colonization. It is best to check in with your local experts before planting this rambunctious little guy and see if he will have eyes and overtaking your yard.

Everybody loves a healthy herb garden and there is no diligent plant tender loving the role of executioner. In this respect, think twice about planting mint in your backyard. There are many kinds of mint plants that can taste dishes and do an excellent job as garnishes, but they all have one thing in common – they are voracious inhabitants of their surroundings.

Mint plants can overpower an unrepentant herb garden. In response, numerous home gardeners only grow mint in containers. The only way to make this randy herb play along with others when planted in a garden is to sink them in the soil while still being surrounded by those containers on the sides. But that may not be enough to deter this little aromatic warrior from bullying more timid neighbors to the yard. Mint can become so aggressive that even the most organic gardeners have to resort to chemicals in order to control damage.

Chives are another herb not satisfied with rising meekly within the limits of a greenhouse. Unlike other soldiers who need very little in the way of field rations in the war on your yard chives – chives may be the easiest of all herbs to grow. With tiny bulbs, they spread over the ground through seeds and beneath the soil. Such conspirators are likely to look with longing at the large open spaces provided by your magnificent green lawn as life begins in your well-tended garden beds.

If chives spread into the lawn the infiltration is not an easy one to defend. Pulling the small plants out of the grass also separates the stem from the root, resulting in even greater spread. Because of its waxy coating, chemicals often can not cling to the plant, and are ineffective. Digging the bulbs is the only sure way to kill the plant but it is possible that only the skinniest of trowels can yield healthy grass. So, please enjoy your chives. Those little purple flowers look amazing – and are also edible – so they definitely help to spruce a bland baked potato.

Related: 40 Remedies Our Grandparents Taught Us That Actually Work

The plant already looks like a terrible actor. What was it covering and what was it doing with the real lamium? Yet its leaves are streaked with thick silver streaks and its flowers burst out in bright yellow, so who can avoid inviting it into the garden. And this can handle even conditions of dry shade.

But when you’re entranced with those pretty flowers, the fake lamium shoots willy-nilly runners who are ready to root and try to suck life out of their yard. And those tiny yellow flowers spit out even tinier black seeds which will further strengthen this garden denizen’s position. No wonder Herman’s Pride is his alternative name-this character can take over a garden.

Yarrow may be the model plant in the garden for the argument between good and bad. There are those who admire the plant for its ease of care and the resulting flowers cluster on stalks that last for the entire growing season.

Then there are those who believe that naming the plant “yarrow” deprives the demon of its full name – “yarrow weed.” A long relationship begins with planting yarrow in a field. The hardy plant thrives in just about every soil, and those flower stalks hold thousands of seeds waiting for insects to carry off, birds or a small wind rabble. And those seeds will remain viable for around nine years in the field when planted elsewhere in your garden or on your lawn.

And if you decide that the yarrow is no longer friend but foe, it’s very hard to break up. Yarrow grows by rhizomes and if even a small piece remains in the digging process it becomes a new plant too. Many gardeners resort to chemicals in desperation in the fight against yarrow but these must be applied regularly during the growing season and even if successful it is likely to be nothing more than a Pyrrhic victory in your garden’s ongoing war.